We work a lot with myths in the pet industry, and in a lot of ways it’s no different from the human food industry. Apparently food lobbying brought into existence the grain-heavy food pyramid, which has now been changed into the food plate. Studies come out all the time about this food or that food, and I’ve seen red meats demonized, breakfast cereals recommended, and the benefits of veganism vs. paleo vs. keto debates, and, ultimately, it’s obvious the unfortunate reality of what the American diet is doing to a lot of us.

It’s a lot to navigate. This is especially true when there’s industry interest in promoting one thing or another. It’s the same thing with pet health - likely you want to do what’s best for your pet, but there’s so much information out there it’s hard to know what exactly is best. Often even the “watchdogs” of pet health spread misinformation or don’t completely do their research.

I’m ruminating on this after Raw Month has ended because likely you’ve been left with questions on raw foods. I’ve addressed some issues such as cleanliness and given some options for pet owners with various concerns with our partial brand lists, but I think there is still more to note.

The first is there may be some surprising ingredients in some of our foods. You’ll notice some raw foods, for example, contain garlic. What’s this about? Isn’t garlic supposed to be toxic for dogs and cats?

While, yes, garlic does belong to the allium family, which is the same family as onions, leeks, shallots, and chives. Onion is most resoundingly toxic for dogs and cats, and to many other mammals. When I started reading about garlic, I came across repeated anecdotal evidence of horses and cows and other animals eating wild onions back in the day, and then showing signs of being poisoned. And, yes, garlic does contain thiosulphate, n-propyldisulfide, and other sulfides referenced that I don’t completely understand. These combinations and alterations of sulfur can impact the blood, possibly causing Heinz body anemia.

So this doesn't look good for garlic. But, as always, there’s a twist. Apparently the main study cited when discussing the dangers of garlic was a small sample size (four dogs taking the garlic, four dogs as a control). Furthermore, each dog was fed an excessive amount of garlic for almost two weeks. For some dogs that meant several heads of garlic, while for others it meant several cloves. At the end of the study, the dogs had shown changes in their blood and some had developed Heinz bodies, but no dog had yet developed anemia.

This is a really extreme study, and it goes to show how our bodies can differ from our pets in ways we don’t expect. But does this mean that garlic truly has the potential to kill our furry companions? 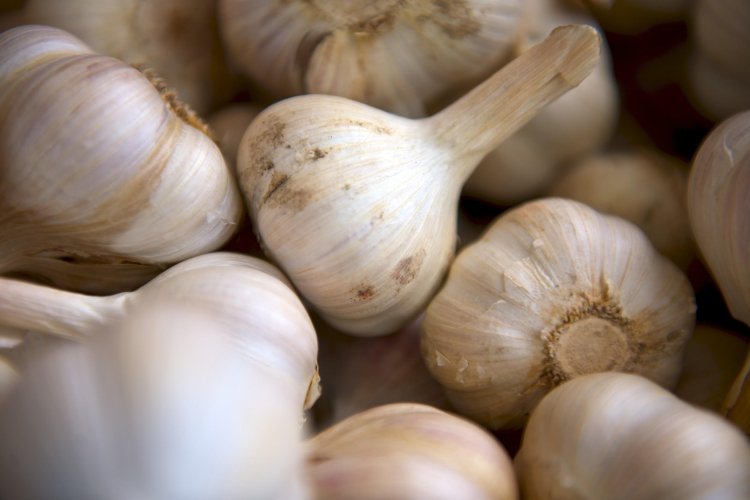 The advice I’ve found on the internet (so, legit) says, yes, treat giving your pets garlic with care. For example, puppies should absolutely not be eating garlic, as their bodies don’t regenerate blood cells as frequently. Of course, take care with any pregnant animals, and those that already have anemia or blood issues. Cats are more sensitive than dogs, reportedly, so be more cautious with the amounts you give them. Finally, the frequency with which you feed them garlic should be changed according to health and season; this is because garlic apparently does build up in the system, and so feeding too consistently may cause problems. You may want to feed it seasonally because garlic is a touted natural remedy for making blood less appealing to fleas and ticks!

The type of garlic you feed and how you prepare it also matters. One thing I’ve learned in my admittedly sparse discoveries of food chemistry is that chopping vegetables can cause certain compounds to mix and become even more beneficial for health. This is true for garlic. Mincing fresh garlic releases more of those healthful properties. That being said, using garlic powder or garlic from the jar might not cut it (pun not intended). Many of our customers at HPNW, for example, are worried about feeding their pets food or treats that come from China, as China doesn’t have the best track record in this area. The same principle applies to garlic - we can’t always be sure where it comes from in some forms, so fresh, organic, garlic you can get in the produce section at the grocery store might be your best bet.

Overall, my personal belief is that there are some benefits to eating garlic in small doses. But, as a precaution, please find your own sources and consult a vet if you have any further questions. Here is a more comprehensive article about foods dogs and cats can’t eat, and there are some cases of garlic poisoning on the list for those who are curious.

One final note for those families that grow herbs inside: if your cat enjoys nibbling on chives, as mine does, keep in mind that chives are a part of the same family as onions, and your cat might run the risk of getting sick. Try hanging them away from other surfaces, or put them in a hard-to-reach place. If your cat eats small quantities, it’s probably fine, but there just isn’t the same amount of research there, so be safe!

What do you think of feeding garlic to pets? Have you ever tried one of our foods with garlic in them?